Surf and turf does not always mean steak and lobster

I thought I would give this recipe a little more of an introduction than my usual recipe posts. Over the last couple of years, both here and on my instagram I have primarily been sharing my Italian recipes. Asian cuisine however, has also played a huge role in my life for almost a decade now, since I first met my wife, Sabah. Vietnamese, Thai, Chinese and Bengali being some of our favorites.

Now if you live in the Hollywood area, you know that many of the Chinese restaurants are a miss, especially if you are comparing the food to the Chinatowns of Philly or New York City. One of my wife’s favorite dishes from Sang Kee in Philadelphia is their House Special Pan Fried Noodles. Ho Kee Cafe in the San Gabriel Valley is where we now go to satisfy the cravings for these noodles. If it were up to my wife, she would venture out to San Gabriel or Anaheim on a bi-weekly basis, if not more. So I had two options, sit in 2-3 hours of LA traffic or try to master these noodles. It took many unsuccessful attempts before she finally approved. I thought the crowd at the Four Season’s Beverly hills was tough, but then I met my wife. I value her brutal honesty, which is why I finally feel like I can share this recipe. Even if you have no basis for comparison, try it out and let me know what you think!

On the day I made these noodles, beef, squid and bok choy is what I had the fridge, but any proteins and leafy Asian vegetables will work.  I’ll also save a short video of this recipe to the highlights on my instagram in the next couple of days so be sure to check back and watch.

If you’ve purchased steamed chow mein noodles at the market, soak them in warm water for 5 minutes then strain. If you purchased the uncooked noodles, boil them until fully cooked and rinse under cold water immediately inside a colander.

Heat your wok or cast iron skillet over medium heat. Add one tablespoon of vegetable oil and spread it around evenly. Add the noodles and carefully spread them out evenly with tongs or a spatula. Allow time for the noodles to crisp up then flip them over and cook the other side. For beginners, I recommend using a cast iron skillet on low-medium heat for about 8 minutes each side. If using a wok be very careful with your heat level, as woks usually have a thin metal core and will burn your food quickly. When ready, place your noodle in a serving dish but keep in a warm place.

Wipe out your wok or skillet. Place wok over high heat and add 1 teaspoon of vegetable oil. Add your beef, salt and pepper. Brown the sides and remove. Repeat this step with the chicken. In a separate pan (to save time) sear the calamari and shrimp on both sides. Set all the land and sea proteins aside to be added later to avoid overcooking them in the sauce. Note: be careful with the salt, as oyster sauce is high in sodium.

Wipe your wok or skillet once more. Add 1 tablespoon of vegetable oil, ginger, garlic and scallion. Stir to flavor the oil. When the oil is bubbling, add the shiitake mushrooms. Cook for 5 minutes then add celery and bok choy. After 2 minutes, add oyster sauce and chili along with the seared beef, chicken, shrimp and squid. Quickly bring to a boil and turn off the heat.

Using a serving spoon – pour the saucy stir fry over the noodles and serve immediately. Garnish with chopped scallions.

This recipe is a personal variation of traditional chow mein stir fry. You can also sub any or all of the proteins for tofu or more vegetables.

Serve alongside steamed gai lan or Chinese broccoli and be sure to always have extra chili on the table for the heat seekers! 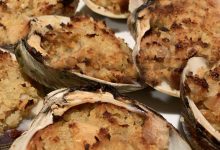 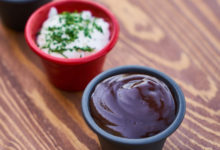 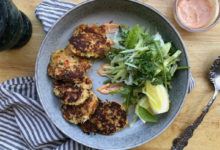 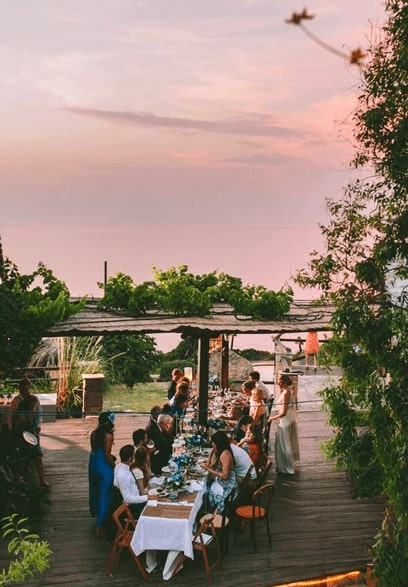